With great power comes great responsibility. Civil servants have to ensure proper utilisation, appropriation and allocation of funds. The decisions undertaken by the Civil Servant impact large number of individuals and society as a whole. Moreover, it also has an impact on surrounding environment if values of trusteeship and stewardship are ignored. For ex.- decision to give permission to polluting industry by largely ignoring Environment Impact Assessment (EIA) report.

Thus, considering large impact of their action, it is necessary to lay a strong foundation of ethical values amongst Civil Servants. Some of the suggested ways to improve ethical competence are as follows:

Thus, adopting the above methods in letter and spirit will ensure creating a strong foundation of ethically competent Civil Servant, which is a condition precedent for achieving $5 trillion economy status.

Q. Describe briefly the features of bronze sculpture art that reached its zenith during the Chola era.

The Chola period is well known for the aesthetic and technical finesse of its metal sculpture. Although the tradition started in ancient past, it reached a high stage of development in South India during the Chola period when some of the most beautiful and exquisite statues were produced. The distinguished patron during the tenth century was the widowed Chola queen, Sembiyan Maha Devi.

The images were clothed and ornamented and formed part of temple rituals and ceremonials. Many of the southern images were carried about in processions. Many Shiva temples of South India have a separate natana-sabha, where the image of Nataraja is placed. This can be seen in the temple at Chidambaram.

Indian sculptors had mastered the bronze medium and the casting process quite early. The ‘lost-wax’ process for casting was learnt during the Harappan Culture. This technique and art of bronze images was skillfully practised in the urban centres of South India like Kumbakonam.

The early Pallava bronze representations of Nataraja are metal translations of wooden images. Later, in the Chola period, craftspeople recognized the greater tensile strength of metal in comparison with wood. Unlike the northern images that were made out of an alloy of eight metals (gold, silver, tin, lead, iron, mercury, zinc, and copper) while the southern ones are made of an alloy of five metals (copper, silver, gold, tin, and lead) and were solid, not hollow.

The sculptors largely confined to the iconographic conventions established by long tradition and yet exercised their imagination and worked with greater freedom during the eleventh and the twelfth centuries. As a result, the bronzes images of this era show classic grace, grandeur and taste. It also absorbed some folk iconographic elements into the mainstream religious or court art (eg images of Andal)

The well-known dancing figure of Shiva as Nataraja was evolved and fully developed during the Chola period and since then many variations of this complex bronze image have been modelled. It is primarily depicted as performing angry tandava or blissful tandava. There are differences in the expression, ornamentation, the number of arms, and in the attendant figures. A wide range of Shiva iconography was evolved in the Thanjavur region of Tamil Nadu (eg. Kalyanasundara, Panigraha, Ardhinarishwar, Bhikshatana etc). Other themes include Krishna and the Alvar and Nayanmar saints. There are a few Buddhist images as well.

Later on, during the post-Chola era, there was increasing ornamentation and elaboration of bronze art that continued the iconographic features of the Chola period but became more and more baroque.

Q. The large-scale occurrence of floods is a result of multitude of factors. In this background discuss the causes of floods and steps to minimise the vulnerability to floods.

Flood is a state of higher water level along a river channel or on coast leading to inundation of land that is not normally submerge. In India, 40 million hectares out of a geographical area of 3290 lakh hectares is prone to floods. Moreover, every year, 1600 lives are lost and the damage caused to crops, houses and public utilities is Rs. 1800 crores due to floods.

The main causes for floods are as follows:

The rivers bring heavy sediment load from catchments. These, coupled with inadequate carrying capacity of rivers are responsible for causing floods.

Steps to mitigate flood vulnerability are as follows:

Thus, the causes of the floods being natural and man made requires, thus to control and mitigate the same requires interdisciplinary approach.

Q. What was the immediate trigger of the World War-I? What were the reasons for the breakout of the war? Comment

World War-I has its roots in the assassination of a prince. On 28 June 1914, Archduke Francis Ferdinand, the heir to the throne of Austria-Hungary was assassinated by a Serbian terrorist at Sarajevo, the capital of Bosnia. Austria saw the hands of Serbia behind this and served Serbia an ultimatum. Serbia refused to accept one of the demands of ultimatum. Hence, on 28 July 1914, Austria declared war on Serbia.  Then, Germany declared war on Russia and France. Britain declared war on Germany. Japan declared war on Germany with a view to capture its colonies in the Far East. Turkey and Bulgaria joined on the side of Germany. Italy initially remained neutral and later joined the war against Germany in 1915.

There are various reasons for the breakout of the war:

The First World War was the most frightful war the world had seen so far in terms of devastation it caused, the number of people who fought it, the famines and the social problems it created. Instead of destroying imperialism, it helped the victorious powers in enlarging their possessions.

Q. The Citizen’s Charter is an ideal instrument of organisational transparency and accountability. Identify the importance and components of Citizen’s Charter. Tracing out its limitations, suggest measures for its greater effectiveness.

The public service delivery of India faced a problem of bureaucratic corruption and delays. The government functioned in a very opaque and unaccountable manner. There existed a problem of information asymmetry between the government department and the consumers. There was an absence of grievance redress mechanism with in government framework.

Keeping this in concern, Citizen's Charters were introduced in India in the 1990s. Department of Administrative Reforms and Public Grievances (DARPG) defines Citizen’s Charter as a document which represents a systematic effort to focus on the commitment of the Organisation towards its Citizens in respect of Standard of Services, Information, Choice and Consultation, Accessibility and Grievance Redress.

Citizen’s charter possess following components to achieve its aim. Its six components are:

The Institutionalisation of concept of Citizen’s charter is there in every government department in India since 1997.  However, its implementation is still in embryonic stage. Earlier, Introduction and implementation of the concept of Citizens’ Charter in the Government of India was much more complicated due to the old bureaucratic set up/procedures and the rigid attitudes of the workforce.

Various Limitations/ Hurdles encountered in these initiatives are:

Various effective measures that can be taken to deal with the above hurdles are:

To summarize, A Citizens’ Charter denotes the promise of an organisation towards standard, quality and time frame of service delivery, grievance redressal mechanism, clearness and accountability.

Q. To resolve the issue of unemployment, there is a need for multi-prong approach. In this light discuss the steps needed to resolve this long-standing issue and also mention the measures taken by the government in this regard.

Unemployment is a situation where person is capable of working both physically and mentally at the existing wage rate, but does not get a job to work. As per the recent statistics unemployment rate in India rose to 7.2% in 2019.  Unemployment represent itself in various forms such as: disguised, seasonal, cyclical, frictional unemployment etc.

To tackle the issue of unemployment following steps must be adopted: 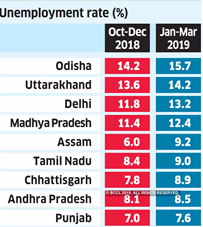 Further, to increase the avenue for employment, the government has taken various steps such as:

Thus, to tackle unemployment a strategy of multi prong approach need to be adopted so as to tap demographic dividend.

Q. Discuss the difference between Himalayas and Peninsular drainage system. Also put forth importance of the river system in India.

Rivers are considered as the lifelines of a country as they provide the most valuable thing for the survival i.e. water. The rivers in India can be broadly categorized into two different categories based on their origin: the Himalayan Rivers and the Peninsular Rivers.

The difference between the two is tabulated below:

In light of the aforesaid, it is also important to discuss the importance of the rivers as such:

Thus, considering the importance of river system and impending climate change, it is important that steps are taken to protect rivers.

Q. The reason for malnutrition/ hunger are multidimensional. In this light, discuss the factors contributing to malnutrition and also suggest suitable measures to improve malnutrition in India.

Malnutrition is a physical state that includes undernutrition (wasting, stunting, underweight), inadequate vitamins or minerals, overweight, obesity, and resulting diet-related non-communicable diseases. As per Reports 31.4% of children are malnourished.

The factors contributing to malnutrition are as follows:

To above causes need to be tackled on multiple fronts by adopting following steps:

Finally, the use of technology needs to be promoted to improve the flow of information and to encourage greater policy coherence.

Q. The Britishers formed Indian National Congress (INC) to act as a safety valve. However, the Indians used the forum as a lightning conductor much to the whammy of Britishers. In this light the purpose behind formation of INC and the intention of Indians in respect of the same.

There is wide spread belief that reason behind the formation of INC was safety valve theory i.e. Britishers wanted to pacify the raising discontent among Indian masses through INC. The discontent among Indians was due to issues like passing of Vernacular Press act, Illbert bill controversy (1883), general discrimination etc.

In this background the INC was formed by retired British Civil Servant A.O. Hume and some of the reasons put forth for formation of INC are as follows:

However, the above justification appears to be a half truth after considering the following propositions:

Thus, once INC was formed, the reason for its formation did not matter much as INC evolved over a period of time and helped India to get much needed freedom.

Code of ethics and code of conduct specify the ethical standards that a group (e.g., staff or a professional group) should follow in order to continue as a member of the group. They are generally formally stated and members are required to accept them as part of their membership of the group while accepting employment/membership.  It is generally adopted by organizations to assist members in developing an understanding of right and wrong. Thus, the Code is built on three levels namely:

Thus, although both the Codes are different from each other, yet they are important for a public servant. The Codes make sure that the public official should uphold public interest over any personal motive or interest.

Hundreds of thousands of deaths occur...

Two Indians and a Pakistani were kill...

The Union Cabinet has approved the ex...

The Union Cabinet has approved the pa...

The Cabinet Committee on Economic Aff...

Experts from India and Israel deliber...