India is one of the most flood prone countries in the world. Riverine flooding is the most critical climate-related hazard in India. Twenty-three of the 35 states and union territories in the country are subject to floods and 40 million hectares of land, roughly one-eighth of the country’s geographical area, is prone to floods.

Reasons for Floods in India:

Floods create various problems such as crop and livestock loss, outbreak of diseases, water and sanitation issues, mud houses gets destroyed, access to basic services such as school gets restricted.

According to the estimate of the National Commission on Floods, 80% of flood prone area in India can be provided with a reasonable degree of protection. To minimize the damage caused by floods, flood control and management planning along with potential impact of climate change need to be integrated into development planning for the country.

In Aug 1947, India won political independence but social and economic independence was yet to be achieved with most of the population being either small or marginal farmers or tenant cultivators. The land reforms which began post-independence have been a continuous process ever since. The main components of land reforms over the years include Tenancy reform, Abolition of intermediaries, Restructuring of agriculture land (land ceiling, consolidation, land records etc.) with various measures being taken during different periods.

Land records have been a continuous phenomenon since independence but its nature has changed based on need of time. Some reforms have been successfully implemented like abolition of intermediaries. Other components have seen limited success with West Bengal doing well on land redistribution and Telangana etc. taking lead in digitizing land records. Mandataory digitization along with measures for welfare of small and marginal farmer and tenants will go a long way in ensuring socio-economic equity among people in India.

The applications of biotechnology are manifold in this regard:

There are a number of more applications of the biotechnology in the agriculture and the allied sectors which can significantly contribute towards the goal of doubling the farmers’ income in near future. The need to the hour is efficiently leveraging the present technology and adequately investing for innovative research in this area.

While women participated in India's struggle for Independence right from the revolt of 1857, Swadeshi movement etc., their participation got mainstreamed with the entry of Gandhi on the Indian political scene. Gandhi believed in the power of the masses and his mass movements actively encouraged the participation of women in large numbers. Women actively participated in various activities including pamplet distribution, picketing, practicing satyagraha, and civil disobedience.

Involvement of women in the initial days:

Gandhiji initially encouraged limited participation of women through spinning, picketing at foreign cloth and liquor shops etc. But once they entered the movement in large numbers, women took part in all aspects of the movement, even taking leadership when needed. Women won respect for their courage and mass participation in the freedom struggle.

Sustainable agriculture is that form of agriculture which attempts to produce sufficient food to meet the needs of the present without compromising the ability of future generations to meet their own needs, say by exhausting soil fertility or irreversibly damaging the environment. It integrates three main goals - environmental health, economic profitability, and social equity. 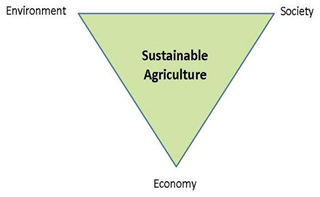 Strategies That Can Be Used To Make Agriculture Sustainable:

With growing population, depleting resources and the increasing threat of climate change, it will be impossible to fulfill the needs of the future unless we transition to sustainable food and agricultural systems that would ensure world food security, provide economic and social opportunities, and protect the ecosystem services on which our future depends.

India is vulnerable, in varying degrees, to a large number of disasters such as, earthquakes of moderate to very high intensity; floods and river erosion; cyclones and tsunamis, droughts; and its hilly areas are at risk from landslides and avalanches. For Indian subcontinent, the projected temperature changes by IPCC, based on the General Circulation Model, projects warming of 2-4.7°C, with the most probable level being around 3.3°C by the year 2100.

Impact Of Climate Change On Disaster Profile Of India

In India, the Brahmaputra and the Indo-Gangetic basin are the most flood prone areas. Floods are a perennial phenomenon in at least 5 states – Assam, Bihar, Uttar Pradesh and West Bengal. Climate change has influenced stream flow patterns through changes in the precipitation, which can be manifested from the flood-like situation in Rajasthan in 2017.

Most of the devastating category-level cyclones make landfall between October and November. But since 2011, Thane and now Phethai impacted the coasts in December. This shows that there is a shift in the cyclonic season and its intensity, which is a clear indication of climate change, due to global warming.

The Indian mountains are also warming and thus attracting more clouds and torrential rains, which brings massive landslide in these areas. Studies suggest considerable increase in frequency and magnitude of landslides in recent times over the subcontinent, especially in Himalaya and Nilgiris region.

India is already experiencing a warming climate. Under 4°C warming, the west coast and southern India are projected to shift to new, high-temperature climatic regimes with significant impacts on agriculture.

About 6% of the land area of the country is currently in the Exceptionally Dry category, which is nearly four times the 1.6% area at the same time in 2018. Droughts are expected to be more frequent in some areas, especially in north-western India, Jharkhand, Orissa and Chhattisgarh.

Thus, while natural variability continues to play a key role in climatological disasters, climate change has shifted the odds and changed the natural limits, making certain types of

Technology may provide a ―silver bullet to cope the consequences of climate change and increasing disasters in the country. The catastrophic weight of these events on society can also be reduced through effective disaster management, and in formulating the management and mitigation policies, a composite disaster lethality index will be worth practicing.

You have been posted as a District Magistrate (DM) in a drought-prone district infamous for recurrent droughts. There have been some recent cases of farmers‟ suicides too. Upon some enquiry, you realize that due to successful cooperative sugar mills in the past and assured market price today, every farmer wants to grow sugarcane, disregarding the local soil and water resource condition. Sugarcane is a highly water-intensive crop. You think that the annual rainfall here, though below average, could be enough if properly managed. However, the local politics in the district revolves entirely around the issue of sugar pricing.

a) Enlist the challenges in front of you.

b) Elaborate your course of action.

The case involves many issues to be tackled simultaneously. And they are not mutually exclusive. Broadly there are 4 major responsibilities I need to work on. 1. Draught mitigation, 2. Farmers suicide, 3. Water management, 4. Reduce political misuse of the situation. As

DM, all these responsibilities have to be shouldered, keeping in mind the overall responsibility of maintaining law and order and development of the district.

To fulfil the responsibilities there are many challenges to be tackled.

The responsibilities can be classified into two major groups- Short term(urgency) and long term (sustainability). And accordingly, the course of action will also have similar two groupings.

The Bay of Bengal region hosts one-fourth of the world’s population and several high-growth economies, and is attracting growing attention as the strategic heart of the Indo-Pacific. BIMSTEC (Bay of Bengal initiative for Multi sectoral Technical and Economic Cooperation), comprising 7 nations of the South and South East Asia, is a sector driven cooperative organisation with focus on sector such as- trade, technology, energy, transport etc.

The BIMSTEC has immense potential for economic growth for the region:

But at the same time, the BIMSTEC faces various challenges, which may inhibit it in realising its full potential. Some of these challenges are as follows:

A successful BIMSTEC can promote regional economic integration and connectivity, which will also help in countering China's influence in the region. India must take on an informal BIMSTEC leadership role in securing the removal of the formidable physical and regulatory obstacles to the free flow of goods, capital, services and people between its member-states.

Sub-categorization of OBCs seeks to divide the central OBC list into sub-groups in accordance with their socio-economic parameters in order to arrive at a correct perspective on the social status of different OBC population in the country. To this end,  the Union govenrment has constituted a Commission under article 340 of the Constitution to examine the issue of sub-categorization of the Other Backward Classes (OBCs).

It is more important to eliminate caste-based disadvantages, with focus on eliminating discrimination and ensuring benefits of reservation are wide spread among the disadvantaged groups. Improvement in social services can help address the impact of discrimination from early stage of life. The sub-categorization exercise could potentially lead to ensure better data on caste-based disadvantages so that benefits of reservation can be more widely spread.

The 73rd amendment Act, 1992 has given practical shape to the Directive Principles of State Policy by constitutionalizing the local governance through establishment of Panchayati Raj in India, which transformed the representative democracy into a participatory one.

Its salient features are:

However, the performance of Panchayats has lot left to be desired, especially in light of limited powers and financial autonomy provided to them by the States. A lot can be done to improve the performance of panchayats, including greater financial autonomy, capacity building, infrastructure improvement and less bureaucratic control. To make it truly participatory, the 3Fs (Functions, Funds, And Functionaries) of Panchayati Raj needs to be strengthened.