Dr. APJ Abdul Kalam described nuclear power as a gateway to a prosperous future.  However, World Nuclear Association has reported that nuclear electricity generation in 2017 was at its lowest level since 1999. Even, Germany has decided to close all its nuclear plant by 2022.

The reason for risk aversion to the nuclear energy are as follows: 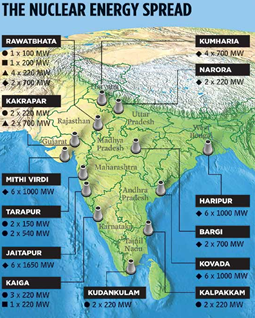 However, there are important benefits in relation to nuclear energy, such as:

Thus, in light of the above analysis it can be concluded that nuclear energy has a promising benefits for India and world. However, the inherent issues relating to it must be addressed holistically.

The GST Council’s 45th meeting was he...

The Health Ministry has flagged the e...

Ministry of Power has issued an order...

The Department of Justice and NALSA h...

TRIFED has entered into a collaborati...

Union Minister of Ayush said that the...

The Prime Minister Narendra Modi has ...

A new Passenger Terminal Building (I)...

The first Expression of Interest (EOI...