The Internet of Things (IoT) refers to a network that connects objects in the physical world to the internet and to each other. By allowing devices to communicate with each other, IoT enhances consumer experience and productivity by minimising human intervention and associated disruptions,

IoT has the ability to change the way we live, work and relate to each other. By reducing the need to perform mundane, repetitive tasks, it can unlock our creative potential. To fully realize the benefits of IoT, concerted action by enterprises and governments is required. India’s draft IoT policy which seeks to synthesise IoT, Smart Cities and Digital India to foster research and investment, is a step in the right direction.

Article 14-18 of the Indian Constitution guarantees right to equality to every citizen of India. Article 14 says that State shall not deny to any person equality before the law or the equal protection of the laws within the territory of India.

The concept of “equality before law (EBL)” is of British origin. It means that no person whether rich or poor, low or high, official or non-official is above law and all person are to be treated equally and subject to same type of court interference, irrespective of their rank/position. It is somewhat negative in concept as it is a declaration of equality of all persons within the territory of India, implying thereby the absence of any privilege by reasons of birth, creed, or like in favour of any individual. However, the concept of EBL does not involve the idea of absolute equality amongst all. Article 14 guarantees similarity of treatment and not identical treatment.

The concept of “equal protection of laws (EPL)” has been taken from the American Constitution. It means that among equals the law should be equal and equally administered. So, it is a positive concept, implying the right to equality of treatment in equal circumstances. Thus, EPL requires affirmative action by State towards unequal.

So, Article 14 itself provides for reasonable classification and the concept of equality permits rational discrimination. Thus, there are exceptions to right to equality which has been reiterated by many of the Court’s judgements and has been provided in the Constitutions as well.  Some of them are:

Hence the rule of equality before law is not absolute and it permits reasonable classification of persons, objects and transactions by the law for the purpose of achieving specific ends. But classification must not be arbitrary, artificial or evasive.

Along with endogenetic forces, Earth’s surface is being continuously subjected to by external forces originating within the earth’s atmosphere (exogenic forces) like weathering, mass movements, erosion and deposition.

Weathering is defined as mechanical disintegration and chemical decomposition of rocks, through the action of various elements of weather and climate. Weathering occurs in situ, with little or no movement. Weathering can happen in three ways:

These movements transfer the mass of rock debris down the slopes under the direct influence of gravity. Mass movements are aided by gravity and no geomorphic agent like running water, glaciers, wind, waves and currents participate in the process of mass movements. Weak unconsolidated materials, thinly bedded rocks, faults, steeply dipping beds, vertical cliffs or steep slopes, abundant precipitation and torrential rains and scarcity of vegetation etc. favour mass movements. The movements of mass may range from slow to rapid, affecting shallow to deep columns of materials and include creep, flow (earthflow, mudflow), slide (rockslide, landslide) and fall.

Significance of Weathering and Mass Movement

The effects of most of the exogenic geomorphic processes are small and slow and may be imperceptible in a short time span, but in the long run play an important role.

All these reasons culminated into the war of independence from 1776 in which various important battles were fought like Concord, Lexington, etc.  Later France also supported American fighters by sending its army under Lafayette.

Outcomes of the Revolution

After the American Revolution, America emerged as a political and economic superpower. The revolution also inspired revolutionaries and freedom fighters across the world, most notably inspiring the French Revolution.

Q. What are the various sources of ethics? Briefly describe their impact on ethics in Indian society?

Ethics is the study of moral philosophy. i.e., the study of what is right or wrong about the human action and thought. It is study of a set of standards that society places on itself. They guide individual's behaviors, choices and actions as a member of the society.

Ethics are derived from various sources, including religion, traditions and customs.

Impact of The Above Sources on Ethics in Indian Society

The British came to India in 1600 as traders in the form of East India Company (EIC), which had the exclusive right of trading in India under charter granted by Queen Elizabeth I.  After the Battle of Buxar (1764), the EIC got Diwani rights also. However, party and parliamentary rivalries, political ambitions of statesman and commercial greed of merchants, jealousy of other sections of the British society due to the large wealth brought by the Company officials back to Britain etc led to the gradual transfer of power from company to crown by dilution of trade monopolies of East India Company.

After the Battle of Plassey (1757), Company had started using its political control to acquire monopolistic control over Indian trade and production but problems such as relations of East India Company and its possessions to the government in Britain, ideology of free market theory of Adam Smith etc. led to the dilution of monopoly of the Company.

A non performing asset (NPA) is a loan or advance for which the principal or interest payment remained overdue for a period of 90 days. The higher is the amount of non-performing assets (NPAs), the weaker will be the bank’s revenue stream.

In its Financial Stability Report for July 2020, the RBI highlighted that the gross NPA ratio fell from 9.3 percent in September 2019 to 8.5 percent by March 2020. However, the central bank said the GNPA ratio of the country's scheduled commercial banks (SCBs) may increase from 8.5 % in March 2020 to 12.5 %by the same period next year, under the baseline scenario.

Factors Behind Accumulation of NPAs In the Indian Banking Sector in Recent Years:

Various steps have been taken to tackle the issue of NPAs. Insolvency and Bankruptcy Code (IBC) has become a powerful tool for the banks to recover NPAs and has seen some good early success and it should be maintained. Steps have been taken to expedite and enable efficient resolution of NPAs of PSBs through Mission Indradhanush, Project Sashakt, consolidation of banks etc. Yet, corrective action is possible and necessary such as:

A tectonic plate (also called lithosphere plate) is a massive, irregularly shaped slab of solid rock, generally composed of both continental and oceanic lithosphere. These plates move horizontally over the asthenosphere as rigid units. Thus, it is not the continent that moves as believed by Weigner. Continents are part of a plate and what moves is the plate.

The theory of plate tectonics identifies 7 major and 20 minor types of lithospheric plates. These plates are continuously in motion with respect to each other. These plates can be moving towards each other or away from each other, based on which the plate boundaries can be called as convergent or divergent boundaries. Fold mountains are triggered by endogenetic compressive forces and are formed at the convergent boundaries of two types: C-C Plate convergence and O-C Plate convergence, which is explained below.

On convergence, the heavier plate, usually the oceanic plate subsides under the lighter continental plate. This zone of subduction is called benioff zone. This subduction of heavy plate under the lighter plate cause tremendous compressional force. This compressional force compresses the sedimentary material and pushes them upwards. Thus, fold mountains are formed on the coast. Eg., The Andes and Rockies are formed by convergence of the Pacific plate with the south American and north American plates respectively.

Here again the denser plate amongst the two subsides and in the process exerts high compressional force on the other continental plate. In case of such interaction fold mountain are formed on both plates - the denser plate which subducts and well as the lighter plate. The subducted plate melts under tremendous heat and the voluminous expansion in form of magma tend to push the new formed fold mountain upwards. E.g., Himalayas are formed due to convergence of Indian plate and the Eurassian plate. Other examples are Urals mountains, Alps etc. 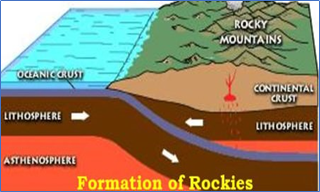 Not just the fold mountains, the plate techtonic theory throws light on the genesis of various landforms. It is, thus, a comprehensive theory which explains many other phenomena like Mountain building, Folding and Faulting, Continental Drift, Vulcanicity, Seismic events (earthquakes) etc. 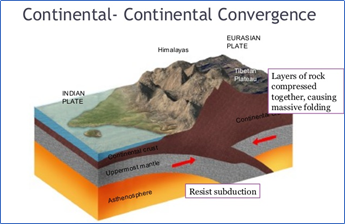 The Preamble talks about the nature of Indian polity as sovereign, socialist, secular, democratic republic and envisages that the objectives of Constitution is to secure justice, liberty, equality, fraternity, and dignity for its citizens. These words of Preamble, in totality, aptly describe the values that the makers of Constitution have enshrined in Constitution.

The basic values enshrined in our Preamble are co-terminus with the ideals and aspirations of the freedom struggle. Nevertheless, these values are very much relevant today because these founding ideologies are slowly being defeated as we have already deviated from it considerably -

The above illustrations clearly depict how we have failed miserably to live up to the expectations of our founding fathers. The further weakening of constitutional values is going to threaten the idea of India that evolved from a complex mix of cultures, religions, regions etc, with social justice, secularism, liberty and equality as its core principles. Thus, there is a need to lay emphasis on basic social liberal ideology, supported by a strong foundation for positive discrimination intervention by the government. There is a dire need to bring about changes in socio-psychological- politico mindset of the individuals, the communities, and the rulers to develop an egalitarian and just society.