Free and fair election is the sine qua non of democracy. To ensure the conduct of elections in free, fair and impartial manner, articles 324–329 empower Parliament to make laws to regulate electoral process.

Thus both the acts support and complement each other. They uphold direct and participatory democracy, accountability and transparency and ensure clean election process the outcome of which is acceptable to all ensuring peaceful transfer of power.

Distinguish between revivalist and reformist movements in the context of 18th century reform movements in colonial India.

18th century reform movements aimed at all round regeneration of society on the basis of modern ideas like humanism, rationalism etc.

Both revivalist and reformist movements helped in furthering socio-religious reforms in the society, which ultimately led to the rise of a modern and progressive society.

Give a brief account of different types of Drainage system which has evolved through time.

Drainage system refers to the origin and development of streams through time. In a region, evolution of drainage system is determined by two factors- nature of slope and geological structure.

Based on adjustment of streams to the geological structure of region, drainage system is divided into two categories. 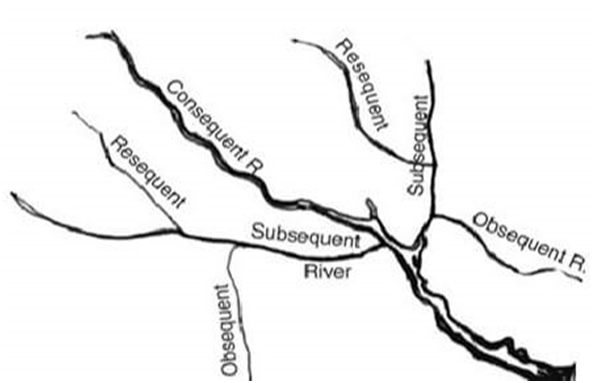 They may be divided into-

2. Insequent Streams: Those streams which do not follow the regional slope and are not adjusted to geological structure are called Insequent stream.

They are of two types-

Thus the drainage system determined by the geographical structures and slope of the region contributes to the further development of the drainage pattern which is witnessed in form of rectangular, trellis, annular, radial etc.

What do you understand by the look-east policy of India? What role can it play in the development of North East India?

The Look East Policy of India was framed by the Narasimha Rao government in the early nineties. It is a substantial manifestation of India's focused foreign policy orientation towards an immensely resourceful and flourishing region, i.e., South East Asia.

Given the geographical significance, the Northeast assumes the role of bridging the space between mainland India and other Southeast Asian nations. The Look East Policy contains in it the development mantra of the northeast region of India implicitly. It can be seen as follows-

Only looking at the east is not enough for the development of northeast India; that's why since 2014, the government of India has developed this policy further in Acting with the east. Many other regional organizations like SAARC, BIIMSTEC, and ASEAN aid in the further development of the northeast region.

Genetic disease is any of the diseases and disorder caused by mutation in one or more genes. With the increasing ability to control infectious and nutritional diseases, there has come the realization that genetic diseases are a major cause of disability, death, and human tragedy.

In developed nations it is rare to find a family that is entirely free from any known genetic disorder. Furthermore, genetic defects are the major known cause of pregnancy loss in developed nations, and almost half of all spontaneous abortions (miscarriages) involve a chromosomally abnormal foetus. About 30 percent of all postnatal infant mortality in developed countries is due to genetic disease.

Moreover, even in developing countries genetic disease are becoming more visible and significant. For example, In India’s urban areas, congenital malformations and genetic disorders are the third most common cause of mortality in new-borns.

With a very large population and high birth rate, and consanguineous marriage favoured in many communities, prevalence of genetic disorders is high in India.

Taking into account that it is becoming a significant health burden, India has started the UMMID Initiative which is designed on the concept of ‘Prevention is better than Cure’.

For most of the time, genetic diseases were considered as rare disease and thus not more attention was given to them. But now scientists and nations have started to take it more seriously.  For example, India has launched the National Health Policy, 2017 aiming to shift focus from “sick-care” to “wellness” and UMMID initiative will help in achieving wellness by promoting prevention of genetic diseases.

What are the major impacts of climate change on India? Discuss the mitigation and adaptation strategy employed by the country to tackle it.

Climate change refers to long-term shifts in average temperatures and weather patterns and their impacts on the planet. Human activities like the burning of fossil fuels have been the main driver of climate change.India is more vulnerable to the impacts of climate change due to its diverse terrain, rapid use of natural resources, industrial development and urbanization.

According to the Intergovernmental Panel on Climate Change (IPCC), India can face the following impacts of climate change:

Most of these impacts are irreversible and hence cannot be remediated even if GHG emissions decline dramatically. Therefore, India employed the following strategies to mitigate the climate change impact and adapt to it.

According to the World Bank, climate change could push more than 100 million people into extreme poverty by 2030 by disrupting agriculture and fuelling the spread of malaria and other diseases. Therefore, implementing global and individual country's efforts under the Paris agreement is the urgent need of time.

Dryland farming is farming in the regions with less than 75 cm annual rainfall. It is characterized by-

What are the principles on which the cabinet system of government functions?

The cabinet is the smaller inner body of the Council of ministers. It is the core executive body in Parliamentary system of government.

It is the fundamental principle underlying the working of Parliamentary system of government. According to article 75(3), all the ministers own joint responsibility to the Lok Sabha for all their acts of omission and commission. They work as a team and swim and sink together.

The principle of collective responsibility also means that the Cabinet decisions bind all the ministers even if they differed in the cabinet meeting. In case of disagreement the minister has to resign. E.g. Harsimrat Kaur resigned in 2020 over three farm laws. Dr BR Ambedkar resigned because of difference over the Hindu code Bill in 1953.

Article 75(2) states that the President can remove a minister on the advice of the Prime Minister in case of difference of opinion or dissatisfaction with the performance of minister. By exercising this power, the Prime Minister insures the realization of the principle of collective responsibility.

Unlike in Britain, in India, it is not required that an order of the President should be countersigned by a Minister. Moreover, the courts are barred from enquiring into the nature of advice rendered by the minister to the President.

Thus, these three principles establish responsibility and accountability of the executive and uphold the Parliamentary form of government in India.

What is the Organization for Economic Co-operation and Development (OECD)?

What is the Voluntary settlement scheme?

What is Rice bran?

Recently the annual faunal survey was...

Recently, scientists have fashioned a...

As per a new study, researchers are e...

The President of India greeted fellow...